The Supertastic Super 6 is a group created by James Diamond's alter ego Bandana Man in Big Time Superheroes. The group was created in an effort to defeat Hawk now that he became a supervillain after being released from prison & stole their album which Hawk plans to release as his own.

The guys at first were against the plan, but in the end they did it and defeated Hawk who was sent back to prison. The cops plan to call BTR when their's trouble too big that they can handle (saving a cat from a tree). 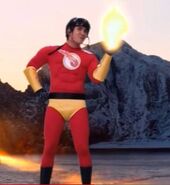 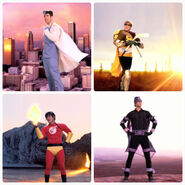 Add a photo to this gallery
Retrieved from "https://bigtimerush.fandom.com/wiki/The_Supertastic_Super_6?oldid=87939"
Community content is available under CC-BY-SA unless otherwise noted.