Hortense "Logan" Mitchell is the genius of the group, but panics under pressure. He is genuine and sweet, and the next most down-to-earth guy in the band after Kendall. He is also the serious one but usually follows along in his friends' schemes, sometimes making schemes of his own when needed. Logan is extremely smart, and the other guys usually rely on him to solve certain problems, like school work and such. However, he panics under pressure, usually leaving it to Kendall to come up with schemes. Whenever the others are doing something bad and they tell him to join them, he always says "I've gotta get new friends", but still joins them afterward.

In Big Time Jobs, Logan loses the Palm Woods 5000 to Carlos, but still has to pay for the damages. Logan stays with Kendall during sign-spinning, but loses it due to his poor working, and opens a babysitting job with Kendall. They eventually pay off their fine and close their babysitting business.

Logan is seen to be very skeptical of ghosts. He has trouble asking Camille out to the dance and states that he has never asked anyone out before, and that either the girl asks him out or James sets him up. In Big Time Concert, Logan tried to kiss Camille.

Logan is the genius of the group. He's smart and can find ways to solve problems. However, because he tends to panic under pressure, in the end, it was Kendall who solve the problem. Hawk's assistance said "Logan Mitchell, the smart one, which means he'll ask questions". In Big Time Guru, he is shown to have lack of

swagger and he is somewhat of a nerd. He loves math. This is shown from the pocket color pencil holder which says 'Math is Cool' and his idol which is Phoebe Nachee, a female math professor. He says that Phoebe Nachee combines the two things he love the most, which are girls and math. He is smart and this is shown in many events throughout the series. For example, in Welcome Back Big Time. In this episode, Logan is capable of finishing all his homework and his friend's (which consist of book reports, math homework, and science projects) in only a day, with a C+ average. It's possible that he could get A's for them but he was only going for a C+ average. He is the one that keeps everyone in the group following the rules and stay grounded. He always reminds them that some of their actions are breaking the rules. But even though he reminds them, the other boys don't really listen to him, and at the end, he ends up breaking the rules. This is shown in Big Time Mansion, how he tries to remind everybody about Gustavo's Mansion sitting rules but everybody forget all about the rules and end up breaking it.

He likes to follow the rules, but as the show progresses he begins to loosen up and breaks the rules alongside his friends. He is afraid of taking chances and in Big Time Crib , Kendall pushed him to take chances in his life and at the end he did by tricking Gustavo, Kelly, and anyone else so that they could have their teen crib.

In the series, he doesn't dance very well. But he can do back-flips. His other ability is beat-boxing. This is shown in Big Time Christmas, Big Time Audition, and also in the song 'Famous'.

It seems like Logan is mostly interested in making millions of dollars. It is shown in Big Time Audition, when Kelly numbers him, he is actually not interested, but when he heard Kelly said that Justin Timberlake made forty four million dollars the year before, he immediately accept the number, saying "Hit me!". Also in the same episode, when Gustavo came to the market to see Kendall, Logan said to him "Don't think about him. Think millions of dollars!". In Big Time Beach Party, Logan was looking for buried treasure. If he did find the treasure, he was going to use it to pay for medical school, giving hints that he still wants to be a doctor.

In Big Time Concert, Carlos said that Logan's biggest weakness is that he could be indecisive sometimes. But Logan didn't write that in his college application, instead he wrote 'weak bladder'.

In Big Time Secret, Logan is one of the only 2 members of the band who didn't break any code. If you don't count the 'No Borrowing Underwear code'

He is 5 ft.8 inch tall, a bit taller than Carlos. He has dark brown hair and brown eyes.

According to Kelly in Big Time Audition, Logan has a cute smile.

Logan is a dependable friend for the guys. He always helps the boys when they get in trouble, even though maybe helping them means breaking the rules. This is shown in Big Time Mansion and Big Time Crib. Also in Welcome Back Big Time when he did the boys' homework. He is close to James when it comes to relationships. Logan asked Camille out on Big Time Dance, but he accidentally kissed Camille in Big Time Girlfriend. Logan and Kendall are close because they are the mature ones in the group. They have the possibility of having a double date. since they are best friends and Camille and Jo are also best friends, but never did because Camille was Logan's girlfriend only for an episode. For example, in Big Time Scandal, Logan was understanding of Kendall's feelings and defended him in Lucy's press conference. Although, in Big Time Concert, they did say goodbye to Camille and Jo together. Logan and Carlos are very close, they seem to do a lot of stuff together like hunting treasure in Big Time Beach Party, hunting ghosts in Big Time Terror, and being good luck patrol in Big Time Sparks. However, they also have a bit of rivalry going on, and tend to fight and argue, like in Big Time Photo Shoot and Big Time Terror.

Camille and Logan's relationship is relatively complicated being up and down. At first Camille likes Logan and is crazy for him. As the series progress Logan begins to develop feelings for her. This is shown in Big Time Dance, Big Time Fever, Big Time Video, Big Time Concert, and Welcome Back Big Time. They finally became a couple in Big Time Girlfriends, but then broke up at the end of the episodes because James and Camille accidentally kissed. Logan actually forgave her, but wanted to break up because 96% of first romances end in break up so they might get it out of the way right then. But, at the end of the episode, they kissed, so this makes it complicated. Katie said that Logan and Camille's relationship is always on and off. In Big Time Crush, Logan and Camille finally agreed to remain good friends and agreed to date other people, although at first Camille asked to Logan "Grandma, are you sure I shouldn't get dressed up that blue outfit that Logan really likes and try to win him back?". But, when he sees her in the movies he realize that he still has feelings for her. Camille is very sweet to Logan and very mature. This makes him consider her as the coolest girl in the world. He mentioned this in Big Time Party and Big Time Crush. For more, see Lomille.

Logan is the brains behind Big Time Rush. Who else is going to handle all that homework? Logan's the go-to guy for solving problems — and with all the trouble the guys get into, it's good to have him around. 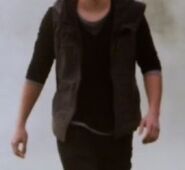