Big Time Sneakers is the 6th episode of the second season of Big Time Rush and is the 26th episode overall. It aired on November 5, 2010 and had an audience of 2.8 million viewers in the U.S.

Kendall gets a shock when Jo and Jett are on the front cover of Pop Tiger with "Jo Confesses: Jett's My Man" on it. When Jo's publicist wants the press to think that she is dating her co-star Jett Kendall and Jo's relationship must be hidden and the two disguise themselves various times to avoid the paparazzi when Kendall simply wants to go to the zoo. Gustavo and Kelly are trying to make Kendall confesses his relationship with Jo so that Big Time Rush gets free publicity. Later Gustavo and Kelly find the perfect shot of Jo and Kendall making out and they post it online Kendall and Jo find out afterwards and get ambushed in paparazzi cameras. Then everyone plots a plan that Jo and Kendall break up and Jett comes to the rescue. Instead they are using Jett a llama and peanut butter. At the zoo Kendall sneaks a handful of peanut butter on the back of Jett's hood, and a llama instantly gets attracted to it. Jett doesn't realize, and tries to back the llama off ending in failure. The paparazzi instantly gets attracted to it and the scene ends up being an online video with over 20 million hits. Jett evens walks the red carpet with the llama and just when Kendall and Jo step up Kelly points the two out and Kendall and Jo get ambushed in paparazzi cameras.

Meanwhile, James and Logan order a pair of sneakers to sell for 3,000 dollars and become rich. However when Logan says James can walk around the Palm Woods in the shoes James accidentally scratches the shoes at the pool. The damage is quickly fixed using Mrs. Knight's makeup and nail polish. But when Logan tries on the shoes he almost instantly ruins them stepping in a puddle of mud Lightning's poop and cement. James is horrified when he sees Logan come back with the ruined shoes and the two are helpless with the tellers coming in the next twenty minutes. When they arrive they instantly reject the ruined sneakers. James and Logan instantly get in a fight rolling across the floor, which the tellers seem to enjoy. Mrs. Knight walks in on the scene and breaks up the fight.

Carlos and Katie are horrified to realize that their beloved Fruit Smacker prices have ascended to $5.00 and try anything to get a pouch. "Robin" and "Hoodie" instantly change the price to a nickel, hacking into the vending machine with the correct code "00000". But the prices easily rise a dollar and the townspeople begin hating Carlos and Katie. The two strike back sneaking into the room that has boxes full of Fruit Smackers and the townspeople begin pouring in when they give them out for free. After "Robin and Hoodie" fail to get a box with the brand-new security system, Mr. Bitters said they had to "give up their rebellious ways" . But eventually all the townspeople whip up their hoods to him and even the guard dog is wearing a hoodie. Mr. Bitters lowers the price to a buck and a quarter and runs to his office after realizing he was outnumbered (and scared).

Jo: I can explain!
James and Logan: (with their arms crossed) Okay, explain.
Kendall: Guys, I can handle this. (to Jo, with his arms crossed) ...Okay, explain!
Jo: I can't. They told me that photo was gonna be on a billboard.
Logan: (pointing to the magazine along with James) Does this look like a billboard?!
Kendall: GUYS!
Jo: I'm gonna see the network publicist right now, to get to the bottom of this.
James: Yeah, well Kendall's going with ya.
Kendall: Guys! I got this. (Turns to Jo) Kendall's going with ya.

Kendall: Can I hit him now?
Jo: Yeah, go ahead.
Kendall: (starts to lunge for Jett, but is grabbed by security) Where did they come from?! 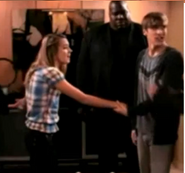 Add a photo to this gallery
Retrieved from "https://bigtimerush.fandom.com/wiki/Big_Time_Sneakers?oldid=91575"
Community content is available under CC-BY-SA unless otherwise noted.