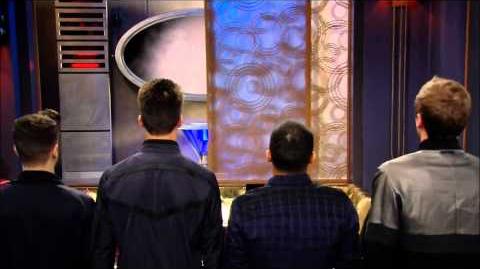 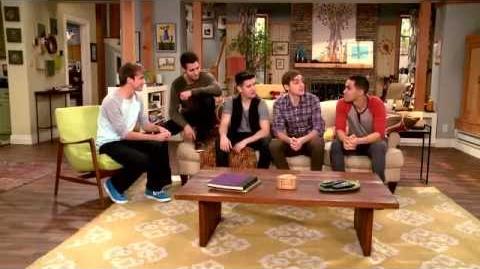 Big Time Marvin (Big Time Klerg [2] or Klerg Time Rush[3]) is an episode of Marvin Marvin.Big Time Rush appears as guest stars of themselves and their Marvin Marvin special is set to be an one-hour event.

Marvin and Teri go to a Big Time Rush concert where chaos ensues when the singers get abducted by the Klerg and Teri gets mistaken for a Klutonian.[4]

When Teri and Marvin went to a Big Time Rush concert the band gets kidnapped by the Klerg and they disguise themselves as BTR. The Klerg try to find the Klootonian by detecting a certain dance but the Klerg see Teri dancing and mistake her for a Klootonian. Marvin has to save Teri before the Klerg take her back to their planet.[5]

James: We got some really great things planned for my hair. I'm gonna open with some gel, ha ha! And then for the encore I might go for some mousse.

James: We're gonna get him Big Time. What? That's what I think the real James would choose to do.

Kendall: Now move your bodies in whatever odd fashion your physiology dictates.
Logan: Excuse my bandmate! What he meant to say was please rotate your appendages in a rhythmically appropriate manner.
James: Uh...dance?

Kendall: “I knew I should’ve come as a solo artist.”

Kendall: You guys took the whole cart?
James: I couldn't leave these shirts behind. It'd be like leaving a bunch of beautiful babies, beautiful babies that look just like me.
Carlos: And check out these glow sticks. They're sticks that glow.
James: They are.

James: There must be something we can do to repay you guys.
Teri: Go out with me!
James:Sure.
Pop-Pop: Easy, rockstar, that's my granddaughter.
Teri: Oh you stay out this old man!
Liz: Dad, he's been in a freezing cold asteroid hurtling through space and his hair still looks perfect!

Retrieved from "https://bigtimerush.fandom.com/wiki/Big_Time_Marvin?oldid=91624"
Community content is available under CC-BY-SA unless otherwise noted.