Backstage Rush is the 1st episode of Season 3.

The episode premiered on May 12 2012. It is the season premiere of Season 3 of Big Time Rush. It is the 50th episode overall.

The guys are on their last day of their "All Over the World Tour" and they want to learn how to change faster so they can break NSYNC's changing record. Kendall and James are determined to beat the record, but Logan and Carlos are focused on other things. Eventually they do beat the record, and they are placed on the "Wall of Fame".

Logan is determined to finish a scientific book that he brought with him on the tour. Also Carlos is accused of smuggling or stealing a cricket from France. Through the episode a french inspector (Jonathan Schmock) searches him to see if he has the cricket. Katie sees the inspector interrogating Carlos and she volunteers to help him hide the cricket. They hide it almost everywhere including in Carlos's mouth. At the end of the episode the French Inspector finds the cricket but lets Carlos keep it because he says "There is one thing we do understand - love" and he lets him keep it.

During the concert Kelly tries to warn Gustavo about the trampoline on the stage. Unfortunately she, along with fans of Big Time Rush gets locked out. She tries to get back to backstage to warn them about the stage to save the boys by climbing over a wall calling Gustavo to see if he can let her in and eventually she does get in and has some workers help her hold the trampoline up during the last song.

Kendall: Yeaaah. We can beat NSYNCS record.
James: Yes, but nooooot by reading word pages.
Logan: They're called books, James and they are the answers to everything.

Logan: Where's my book... and the couch?

Worker: We were told to start loading the truck.

Inspector: But the cricket! You will be arrested for illegal smuggling. (Another inspector whispers in his ear.) Arrg! I can not arrest you because we are in Canada, but Big Time Rush will never be allowed to perform in France ever again!

Gustavo: What is going on!!!

Katie: Carlos smuggled a cricket out of France and we just got busted.

Gustavo: OK, how did we miss that!?

Carlos: Bye little, buddy. We almost made it to LA. But we'll always have Paris. (Puts Canada sticker on box and gives cricket back to Inspector)

Inspector: France doesn't understand a lot of things: Space travel, bikini tops, soap. But there is one thing we do understand is love. Be good to him!

Carlos: Yes, my cricket is saved!

James: How come they get happy endings, but we don't.

Kendall: Because, we haven't figured out the secret to quick change.

Gustavo: Now get out there and let's ELEVATE!!! 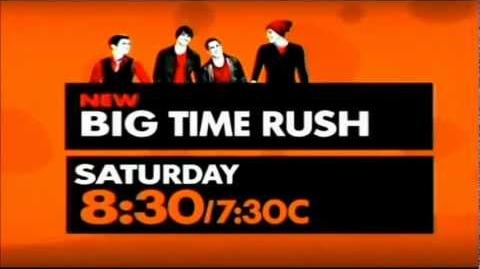 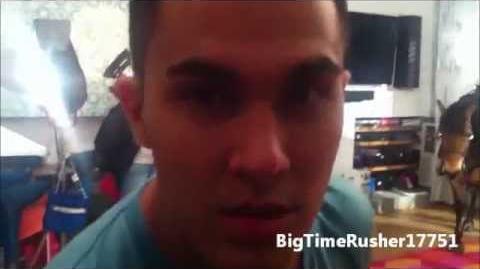 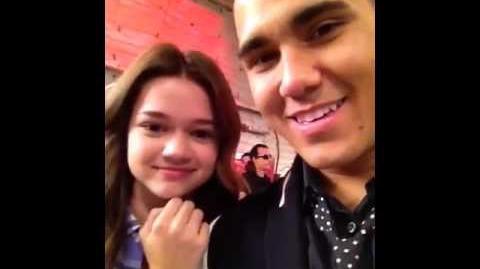 Eating a cricket!
carlos with the cricket in his mouth
Add a photo to this gallery

Retrieved from "https://bigtimerush.fandom.com/wiki/Backstage_Rush?oldid=91281"
Community content is available under CC-BY-SA unless otherwise noted.